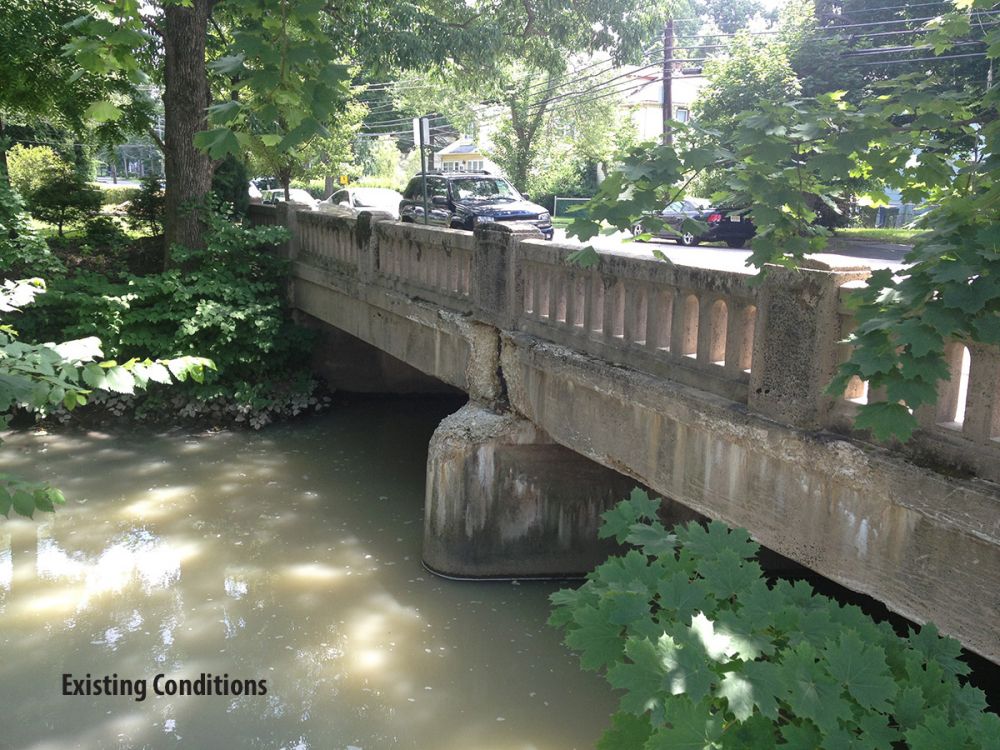 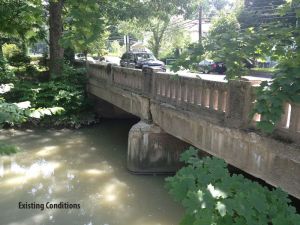 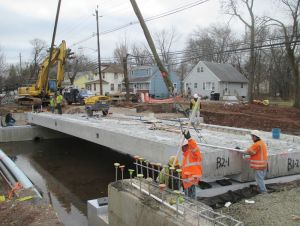 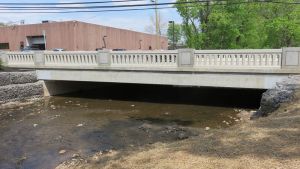 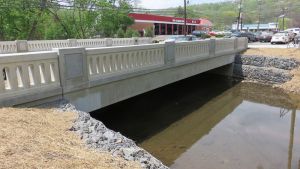 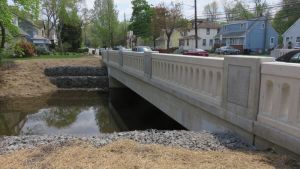 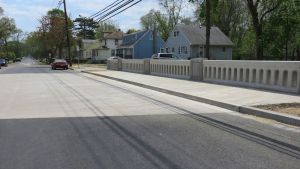 CME Associates was hired by Union County to prepare the Final Plans, Specifications and Estimate for the replacement of the Raymond Avenue Bridge over the Green Brook.

The inspection report dated June 23, 2010 (8th Cycle) rated the bridge deck as being in "Poor" condition and the superstructure and substructure as being in "Fair" condition. The inspection report recommended replacement of the deck and repair of concrete at the substructure level. A medium priority level letter was issued as part of the inspection due to heavy concrete spalls on the underside of the deck above the stringers nearest the curbs. The decision was made by the County to replace the entire bridge.

The proposed bridge that CME designed consisted of a single span precast, prestressed adjacent box beam superstructure supported by cast-in-place reinforced concrete abutments. The new bridge has been designed to support AASHTO LRFD HL-93 vehicular live loading as specified in the 2010 AASHTO LRFD Bridge Design Specifications, 5th Edition, as modified by Section 3 of the 2009 NJDOT Design Manual for Bridges and Structures, 5th Edition. The span length will be approximately 54′-9″ from centerline of bearings to centerline of bearings. With two 9′-0″ wide sidewalks, two 6′-0″ wide shoulders and two 12′-0″ wide travel lanes, the new bridge width will be 56′-6″.

Due to the 20 degree skew of the bridge, the construction of the new superstructure will not be without its challenges. As per the NJDOT Design Manual's Standard Guide Plate 3.10-14, each box will be transversely tied only to the box immediately adjacent to it. As opposed to bridges with less than a 15 degree skew angle that can transversely tie all of the boxes together with one tie rod, no more than two boxes can be tied to each other at any given location on the Raymond Avenue Bridge. This required wider intermediate diaphragms within each of the twelve (12) BI-48 box beams (27″ deep x 4′-0″ wide) that could accommodate the additional tie rods.

The reinforced concrete abutments were designed without a backwall so that the concrete deck slab could be poured over the end of the box beams to form an end diaphragm directly over the bridge bearing seat. The abutments and wingwalls were designed with spread footings since rock was relatively shallow at the bridge site. Finally, precast decorative balustrade parapets were detailed to provide an aesthetically pleasing architectural treatment for the new bridge.