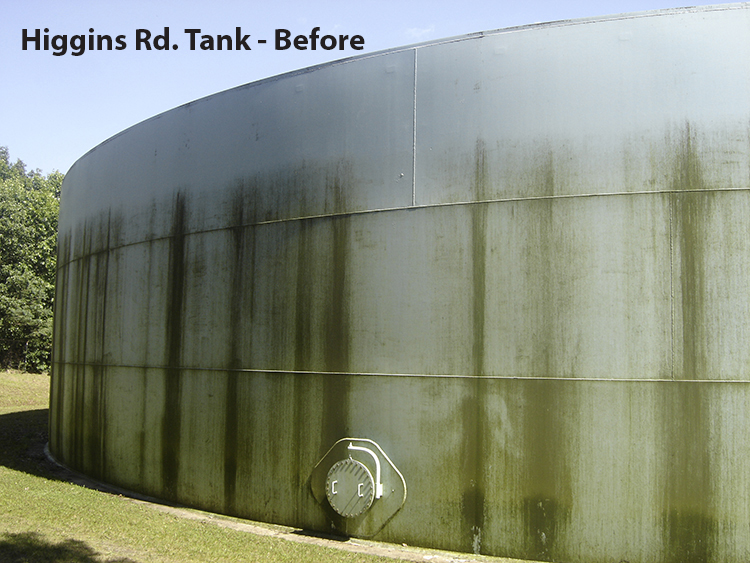 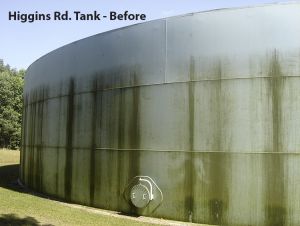 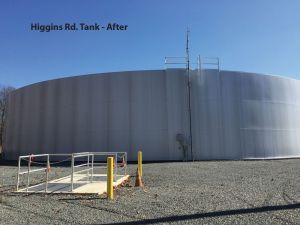 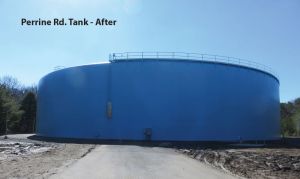 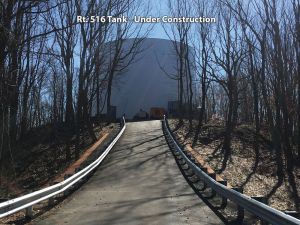 The Old Bridge Municipal Utilities Authority utilizes a number of tanks throughout its distribution system for storage, diurnal demands, pressure maintenance, flow equalization and fire flow. These tanks, which were constructed between the 1950's and 2007, include ground level storage tanks, standpipes, Waterspheroid and Hydropillar style elevated tanks. Among the largest tanks in the OBMUA system are the 2 million gallon Route 516 Tank, the 3 million gallon Higgins Road Tank and the 10 million gallon Perrine Road Tank.

The Perrine Road Tank is a 10 million gallon ground level storage tank, 212 feet in diameter and 40 feet tall. The tank is utilized to store a minimum of 2 million gallons per day of potable water provided by an outside purveyor, provided at a continuous flow rate. A connected pump station draws from the tank to supply the surrounding distribution system to meet variable demands. The tank was constructed around 1990 and, after 25 years of continuous service, was in need of preparation and painting in response to the initial stages of the failure of the original coatings. Due to the cost of preparing and painting a 10 million gallon tank as well as the operational adjustments required in the distribution system to remove this tank from service, the OBMUA required the project to provide a coating system with a life-cycle similar to the original coatings. A three coat system, utilizing zinc-based primers on the interior and exterior of the tank, followed by high-solids epoxy coatings on the interior and epoxy and fluoropolymer coatings on the exterior was applied to maximize the time before recoating. The original cathodic protection system was also replaced to complement the extended-life paint system. The tank was removed from service in the early Fall and, through the outstanding efforts of the painter
through the simultaneous employment of multiple crews on the interior and exterior of the tank along with favorable weather through the winter, the preparation and painting work was completed in time to return the tank to service prior to the Spring.

Interior and exterior inspections were performed on the 78 foot diameter by 56 foot tall Route 516 Tank and 146 foot diameter by 24 foot tall Higgins Road Tank to evaluate their condition and it was determined that recoating of the tanks would be required prior to failure of the existing coatings and deterioration of the steel structure. Removing these tanks from service would be difficult as the Route 516 Tank is the main supply of water to one pressure zone in the distribution system and the Higgins Road Tank is utilized to maintain pressure in another. Through the construction of an interconnection between the two tanks under another project, which allows each tank to individually perform both functions, the OBMUA was able to isolate each tank from the system for rehabilitation. To maximize the life-span of the coating system, the same coating system applied to the Perrine Road Tank was utilized along with the installation of cathodic protection on both tanks. The contractor was able to perform the rehabilitation of each tank without negative impacts to the distribution system.